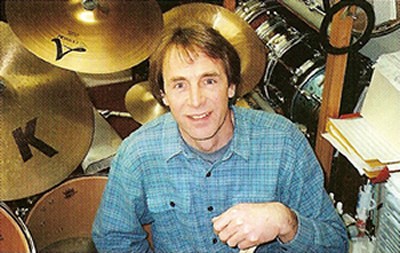 Paul’s first encounter with a drum was at the tender age of five and a half at school when a drum was passed around the class for the pupils to copy a certain musical pattern demonstrated by the teacher. Paul had no problem with this and was chosen by the teacher to play in front of the school during a play. The seed was sown. At the age of around 10, Paul was given a snare drum after continuously tapping with knives and forks at the dinner table! This drum was an Eric Delaney model with a small cymbal attached. Paul progressed to an Olympic bass drum, snare drum, and hi-hat and took lessons from a music store in Croydon. Paul helped out on a Saturday morning and was asked to teach some of the new rock patterns to other youngsters. Paul played with different bands in the Beckenham, Kent area and studied with drummer Ernie O’ Malley.

The band members were all older than Paul and when the opportunity arose in 1962 to tour with Rolf Harris, Paul was given special permission to leave school prior to his 15th birthday. This was the start of Paul’s professional career. Paul toured around England with Rolf Harris on the Larry Parnes package tour backing all the acts on the first half, headlined by The Tornados and Joe Brown. At this time, Paul was playing on an Ajax kit but through his friendship with Tornados’ drummer Clem Cattini, was influenced in buying a Trixon kit.

In 1964, Paul moved to Barking, Essex, and while working there with a band, Paul got the job with Tony Jackson and The Vibrations. Tony Jackson, being the lead singer with The Searchers, having just gone solo. The first single for Pye Records, ‘Bye Bye Baby’, reached number 25 in the charts. Paul appeared on many radio and TV shows such as Top Of The Pops, Thank Your Lucky Stars, and Ready Steady Go. After achieving a couple more minor hits including a number 12 record in the Swedish charts, the band eventually parted after 3 years.

Paul then joined a soul band for several years, recording and touring. It was prior to a tour in Germany that Paul was called by Chris Dreja after being recommended for the job with the New Yardbirds. It was left that Chris would contact Jimmy Page to sort out a meeting, but on returning from Germany, Paul found that Chris Dreja had left the band and a meeting was never arranged. Jimmy Page went on to form Led Zepplin. When the soul band split up, Paul joined a band called The End which was produced by Bill Wyman. This name was changed to Tucky Buzzard for later recordings. Paul recorded and co-wrote two albums with the band: one recorded in England; the other in Spain. While performing in Spain, the band also backed, co-wrote and recorded with Spanish star Miguel Rios, who had a Number 4 single and a hit album.

In 1972, Paul joined Fuzzy Duck, and recorded their debut album which has since become a collector’s item. Paul co-wrote some of the album’s songs. During this time, Paul studied with Frank King in London and also had lessons with Jon Hiseman. Paul also started to do session work with various artists and has played on hit records in various countries, including Holland, Belgium, Spain, Sweden and the UK, including a number one and number two hit. He then joined a band called Tranquility, recording their second album and touring extensively in America for two years. They supported David Bowie; Earth, Wind and Fire; Yes; Billy Preston; the Everly Brothers; and many more famous acts playing at top venues including Carnegie Hall.

Back in the UK, while on a session, Paul was offered the gig with Maggie Bell.
Recording her second album, ‘Suicide Sal’, and doing four tours of America and working around Europe, including supporting The Who at Madison Square Gardens and Charlton Football Ground to an audience of 70,000.

Paul moved to Great Horkesley, Colchester, in 1983 and set up Orchard Percussion Studios, offering drum tuition.
After a reunion with Tony Jackson in 1991, Paul formed The Soul Detectives
to back Tony and also to perform in their own right. Due to failing health, Tony did not perform many gigs and The Soul Detectives carried on with various members. Also from 1992 to 2000, Paul played for Steve Harley and Cockney Rebel, recording two albums and touring Europe and Great Britain.

Paul has written four drum tutor books and released 3 drum videos and a DVD. The beginner’s DVD was co-presented by Gary Marshall. He has performed at many drum clinics around Great Britain and has also written fifteen pieces for the Trinity College London Drum Kit Examinations. Paul is also interested in composing, having released his own solo CD, ‘Pablo’.

June 2013 The Paul Francis Band was formed with Chris Halls and Trevor Cushing as lead vocalists and guitarists, Mick Nottage on bass guitar, Win Bernard on keyboard and vocals and Paul Francis on drums. The band are famed for their varied covers which include hits from the likes of Paul Simon, Stevie Wonder, Bruce Springsteen, Jackson Browne and The Eagles to name just a few. 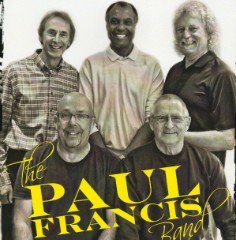 The Paul Francis Band is available for private and commercial bookings and allocates certain dates for charities. For bookings or enquiries please call 01206 271634 or email paulfrancis@keme.co.uk